Canadian superstar Drake has been setting his own thirst trap for years, whether it is his rude boy persona or his cool, Canadian, Jamaican accent, ‘The Boy’ knows how to pull them sometimes without doing a thing. Joe Budden, rapper and host of the popular podcast State of The Culture, was hosting his Instagram Live session, which saw quite a few big names passing through, including Drake. The comment section got pretty entertaining, especially when Champagnepapi and former adult film star Jada Fire began dropping some spice on each other.

Jada mentioned that she’s had the Toronto star in her sights for a long time, trying to bag him not just for his coins. She went on to reveal that she has actually slid into the rapper’s DM a few times. However, she never got a response. With Drake having a ton of time on his hands, it seemed the perfect time for him and Jada to chat it up in the virtual presence of a couple thousand viewers.

“Jada Fire I used to get so crazy to you off dial-up,” confessed Drizzy. He followed that up with a little bit more fan love, “Jada and Cherokee def still in my top searches on the thickest apple laptop I have in storage.”

#PressPlay: Former adult film actress #JadaFire was trying to shoot her shot at #Drake on #JoeBudden’s IG live, but I don’t think it went in ? (SWIPE)

Once Joe Budden picked up on Drake’s comment, he immediately got in on the trolling. “This n***a was rattling the snake to Cherokee, you could tell he a different n***a.”

The comment section immediately lit up with a few fans asking Drake to remain cool and think things through since he has already got one retired adult star pregnant.

On top of that, it seems Jada Fire was a bit hesitant to join Joe Budden’s Live, but she finally gave in after a few calls from Joe. 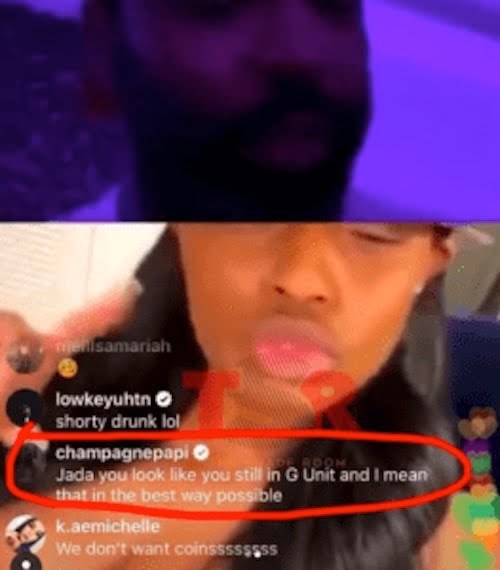 “Jada you look like you still in G Unit and I mean that in the best way possible,” joked Drake as soon as she got on. Jada Fire picked up on the shade however, Drake quickly apologized. “Haha Nah I love you deeply my bad I couldn’t see the rest.

Nonetheless, it’s good to see that Jada finally got her chance to shoot a real shot at Drake even though he dodged the advance.