Santigold, Shaggy, and Ziffy Marley are among the big names set to appear on U-Roy’s posthumous album.

The legendary reggae artist U-Roy’s music will continue to resonate with fans as his final studio album has been confirmed. The reggae/dancehall icon sadly passed away three months ago. His last effort will be called Solid Gold U-Roy and is a posthumous collection of his phenomenal offerings. The album release date is set for July 16th and will be released through Trojan Jamaica/BMG.

When the album was first announced in 2020, it was supposed to be in conjunction with a world tour. The pandemic severely affected those plans, and the “Natty Rebel” singer passed away last February 2021 at 78-years-old. This album will be used to highlight his enormous volume of work that left an indelible mark on the reggae fraternity. It’s no wonder he was crowned the undisputed King of Dancehall and all deejays. His style of toasting is considered one of the major influencing factors of the modern rap genre as well.

The album was recorded just four days back in 2018 when several legends came together at Trojan Jamaica Sounds studio in Ocho Rios to make it a reality. Present at the recording were Trojan co-founders Zak Starkey and Sharna “Sshh” Liguz. The crew featured the renowned production duo Sly & Robbie, along with keyboardist Robbie Lyn, guitarist Tony Chin, and Starkey. The time frame was short because U-Roy had to leave to go on a European tour. “U-Roy would toast his songs live and Sshh would sing the songs that were to be sung later by the guests,” Starkey shared in a press statement. He added: “Sshh and U-Roy bonded quickly doing this and had a lot of fun doing it.”

She also shared about how approachable U-Roy was and how easy it was for them to bond.

“We met U-Roy through our friend, Wayne Jobson, who took us to meet him in Kingston in early 2018. We ate lunch and got on great, and talked about re-recording his greatest hits, with him joined by special guest artists. He was easy to talk to, very dignified and confident, but very approachable. Cool looking and unassuming, but then he would open his mouth, and out would come a big, booming statement,” he also said through a press statement.

He added that getting to work on the album meant a lot to him since “we wanted everyone to know that U-Roy helped invent rap.”

As could be expected, the album features a number of well-known names in reggae, including Ziggy Marley, Shaggy, Big Youth and Mick Jones, Robbie Shakespeare, Jesse Royal, Tarrus Riley, and others. There will also be some new music as a new single called “Man Next Door” features guest vocals from Santigold. She shared that it was an honor to work with a major pioneer in a genre. 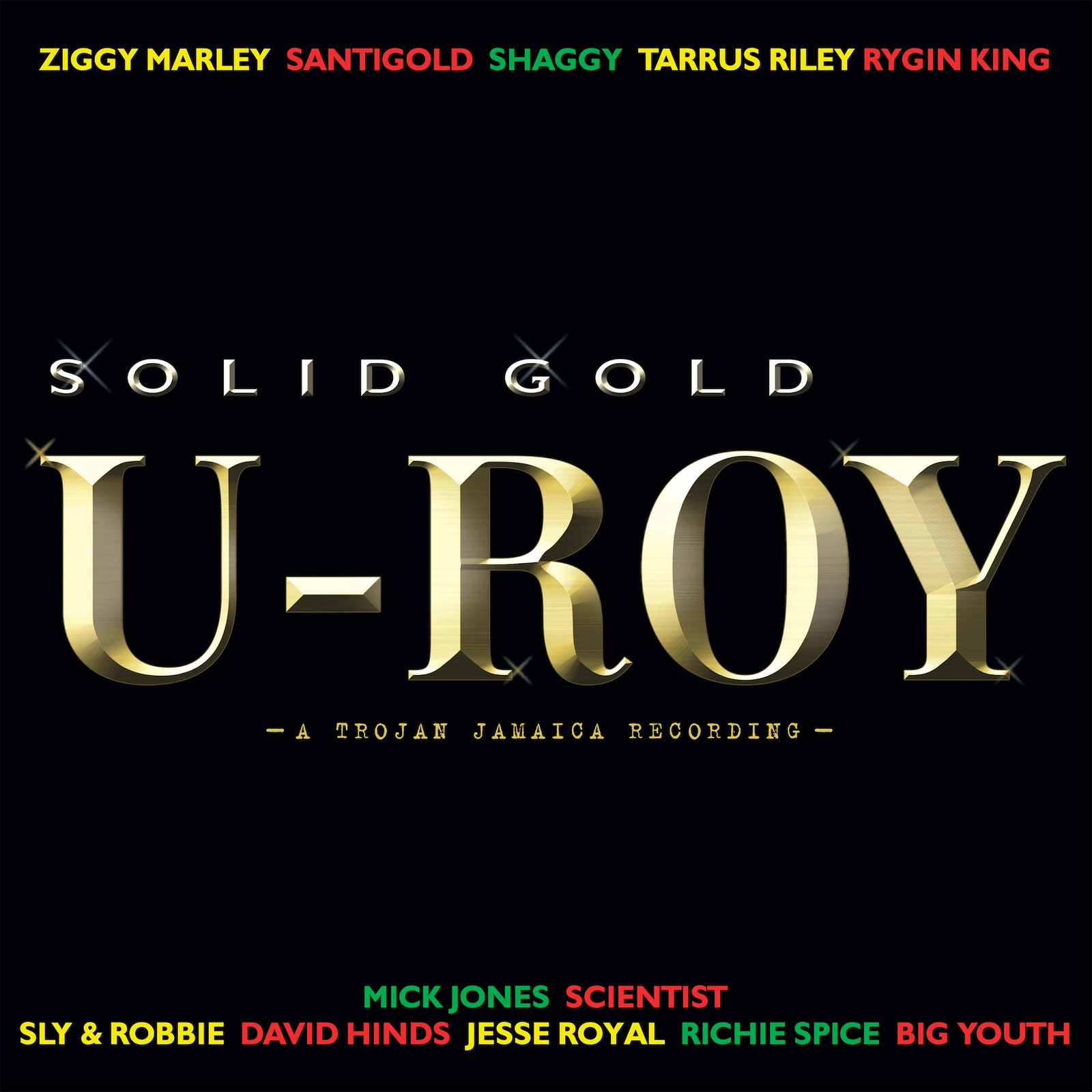 Santigold also admitted that she was filled with pride to record this song in particular since it was based on the 1968 reggae standard originally recorded by The Paragons and written by John Holt. The track was sampled in U-Roy’s own “Peace and Love in the Ghetto” from 1982’s Original DJ.

“He was a major pioneer in a genre that influenced me so deeply. And it just so happened that the song I was asked to sing, ‘Man Next Door,’ has been a favourite of mine since I was a little girl. It felt so special to get to sing that song in particular—I knew the harmonies in my body without having to think for a second—and to hear his voice cutting through, driving the rhythm, drawing us all into his world. What a gift that I got a chance to sing on this track with him. He was one of the greats,” she said via press release.

The video for the new track is the brainchild of Starkey and Sshh, who collaborated with Nick Franco of 1185 Films. Solid Gold U-Roy is available for pre-order now.