LHHATL star Tommie Lee is trending again, but this time the beef is personal, and the pro-life vs. family privacy tea is all over the internet.

Months ago, the story broke that Tommie Lee from LHHATL was about to be a grandmother after her 17year old daughter, Samaria, confirmed she was expecting her first child. While the reality TV star remained mum on the reports, Samaria posted some positivity and encouragement to her timeline back in May.

“I made my choice to keep my gift from God and live not caring about what anyone else thinks,” Tommie Lee continues. “I am beyond grateful and happy for the people who stuck around to let me know they got me because only God knows it takes a village to raise one child! My life is only going up from here I just have one extra life coming with me and I’m beyond happy for it. And for all the young pregnant women or women with a child let me be your inspiration! It’s okay you will do just fine.”

Most recently, however, Samaria spilled the beans that she and her mom are on bad terms after Tommie tried to trick her into having an abortion when she was already seven months pregnant.

“Y’all I was just told how my mom and aunt teamed up to try to trick me into having an abortion. Same aunt that had her first child at 17!! And mother at 18,” Samaria wrote. “I’ve been staying cool calm collected but my aunt and mother got me to fly to LA thinking my mother was dying only to try and be forced to have an abortion!! After I didn’t want it I was kicked out of the house and forced to find my own way home!” 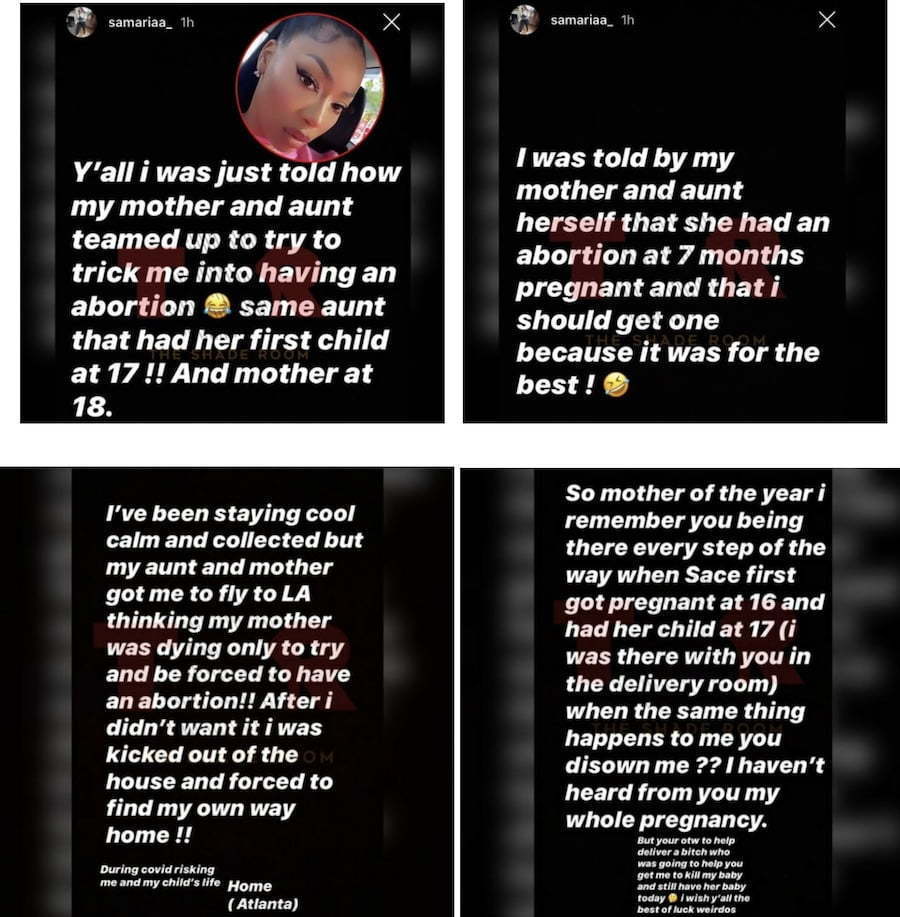 The internet immediately got on Tommie Lee’s case, labeling her a bad parent, although her daughter did say she was told ‘it was for her best.’ Samaria went on to add that Tommie hasn’t communicated with her throughout her pregnancy—not even to tell her happy birthday and sarcastically called her ‘mother of the year.’ Things got worse when Tommie finally took to IG Live to respond, sharing that she was so opposed because she wanted Samaria to break the family cycle and live her life to the fullest. “I was hurt. I was disappointed,” she shared during the tearful session, but she quickly learned how unforgiving the internet can be and was trending within hours.

“Keep it in the family, not on the internet,” one user wrote with a facepalm emoji while another observed, “the Tommie Lee situation with her daughter is sad. I understand where Tommie is coming from about struggling as a teen mom. But asking someone to get an abortion at 7 months is unacceptable.”

#PressPlay: LHHATL’s #TommieLee clears the air after her daughter took to social media to allege Tommie wanted her to get an abortion (SWIPE)

Others were a bit kinder about Tommie Lee wanting her daughter to finish high school and do better than her— “I feel like Tommie wanted her daughter to break some generational curses, y’all know she speaking facts” while others weighed in on what they felt was Tommie’s own shortcomings and hypocrisy in the situation—”At the end of the day she should’ve been a better role model for her kid. Instead, she was acting wild, fighting and getting drunk 24/7. Girl please!”

Samaria has since responded, saying, “You wouldn’t know where I was living or what’s going on with me cause we don’t speak… I’m in my rightful grade and currently about to start school at home!” she added. You doing all of this but not once spoke on what happened in LA.”

Was Tommie Lee wrong to reach out in this way, or is the relationship already beyond repair?

#TommieLee’s daughter #Samaria stepped in to speak on her mom’s recent live. (SWIPE) Hopefully they can work this out